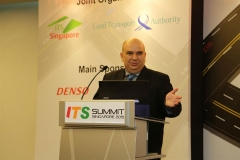 We’re very proud to announce that Mohammed Hikmet, Managing Director and Co-founder of HMI Technologies was appointed President of ITS New Zealand at the end of 2014.

Mohammed was appointed as President following a vote by members of ITS New Zealand. He has also been invited to join the Ministry of Transport’s ITS Leadership Group.

Last month ITS New Zealand signed a Memorandum of Understanding with ITS Singapore, which took place at the inaugural National ITS Summit where Mohammed was invited to speak.