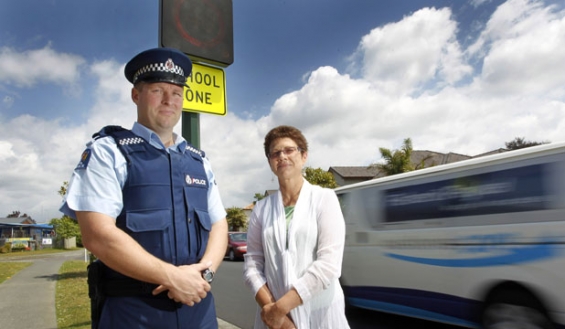 A Willowbank School student narrowly escaped being hit by a car after reaching out to pick up her bag off the road.

Fortunately the car was travelling at the 40kmh limit.

“Her head was right where the car stopped,” principal Deidre Alderson says.

If it had been going any faster the community could have been grieving her loss, she says.

Road policing senior sergeant Mike Stopforth says this is just one story and he’s sure there are more.

“The signs are well worth what they cost if they save one child.”

The high visibility signs display a 40kmh speed limit and have been installed outside at-risk schools where speeding drivers have been identified. They are turned on at the start and end of the school day.

Mrs Alderson says it’s made a big difference to the safety of the 805 primary students at the school gates each day.

“The volume of traffic has decreased slightly because people are aware they are going to have to slow down.

“We’ve had lots of positive comments from the community and it gives you an increased confidence that our children are safer.”

The signs are also helping to change driver attitudes.

“I did have a mum say to me that it’s so ingrained in her she was travelling past on a Sunday and found herself going down to 40kmh,” she says.

Mrs Alderson would like the $15,000 signs to be mandatory at all schools.

Police have noted a significant reduction in the speed of cars travelling past Elm Park School, which also has one of the signs.

“The feedback we are getting from schools is all positive,” Mr Stopforth says.

He says extra care is needed when driving near schools because children are unpredictable.

“Drivers need to remember that when the signs are not illuminated care still needs to be taken because there may be kids in the area doing other activities,” Mr Stopforth says.

Article written by NICOLA WILLIAMS of the Eastern Courier as seen on stuff.co.nz